The Albayzín of the Al-Andalus period

The Albayzín of the Al-Andalus period

Granada was born as a city in the 11th century. The Zirid dynasty arrived in Granada and settled in the area known during the Roman period as Medina Elvira. In 1013 approximately, the Zirids settled in the area known nowadays as Mirador de San Nicolás, a viewpoint. However, in 1090 this dynasty was defeated by the Almoravid, which also settled on the hill of the Albayzín.

This is the period of the taifas (political and administrative division of the Muslim territory) all over the Peninsula, and known as the years of constant civil wars for power in the Kingdom of Granada. In 1157, the Almohad took over the city, and ruled until 1212. During this period, the Albayzín grew significantly, thanks to the arrival of its new population.

A palace and fortress complex was built in 1238 in the area of the Alhambra. This palace will become the political and administrative centre of Granada. The Albayzín suburb was created during this period. The Plano guía del Albayzín Andalusí (Guided Al-Andalus Albayzín Map) was conducted by Antonio Almagro, Antonio Orihuela and Carlos Sánchez. It is an outstanding and recommendable map of the district that gives details about the borderlines of the walls of this period which have lasted until today. In the map, they explain: “The Albayzín walls were built on the second third of the 14th century. They started the walls in the Cuesta del Chapiz, where they met the Axares district walls , followed Darro riversides upstream, continued uphill until the viewpoint called San Miguel Alto, and then continued downhill until the Puerta de Fajalauza, the entrance gate to the upper part of the Albayzín. The walls reached the Postigo de San Lorenzo, an archway, and ended in Puerta Elvira, another of the walls’ gates. Upon the conclusion of the Modern Age, the suburb started to be known as Albayzín, and this name has lasted until today. This urban complex included the Alcazaba Antigua, the most ancient military structure of the Alhambra, the Axares district and the district located on the western side of the defence walls.” 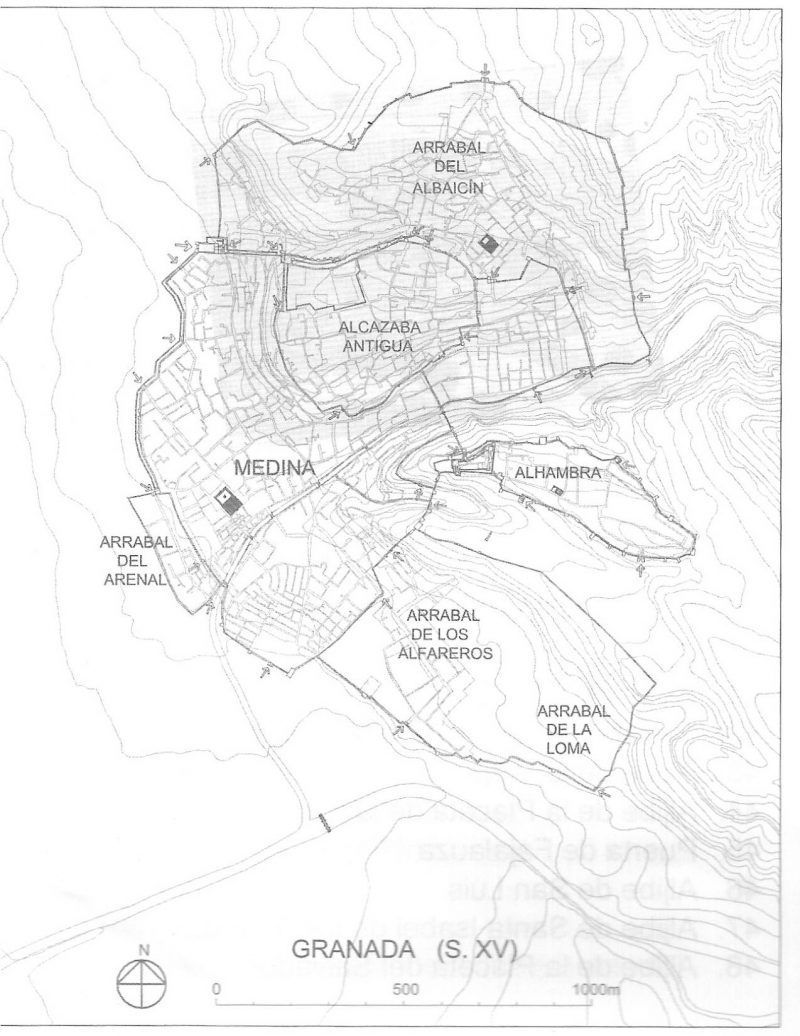