“I am a photo seeker. I am a compulsive collector. Thanks to the internet, the first photos of the Albayzín, Granada and Spain were collected and spread.” This is just one of the passions of Antonio Sánchez, a well-known architect from Granada who, among many other merits, restored the last Nasrid house in Granada, which is to say his residence.

I was lucky to get such a special house in 1976, this is the place where I live. It is the only Nasrid house that is preserved. To restore the house, I started to search for pictures, and I located the old blueprint of my house. This was the incentive that made my passion for photography grow. First, I searched for all the engravings. When I finished, I searched for pictures, for which the internet was very helpful. However, the information on the internet has been exhausted. At night, I search for collections of thousands of pictures of Granada taken during the fifties and sixties. But nowadays there aren’t anymore.”

My mentor discovered the house for me, and I took five years to restore it. “He still ‘talks’ to me”, he assures.

However, twice a year, he goes to Paris to specialized photography exhibitions. During one of these journeys, he found the oldest picture of Granada to present day, taken in 1851.

“We have reached an absurd level of difficulty in local licenses management. Some of my projects from 20 years ago for the restoration of beautiful houses are still in the pipeline.” 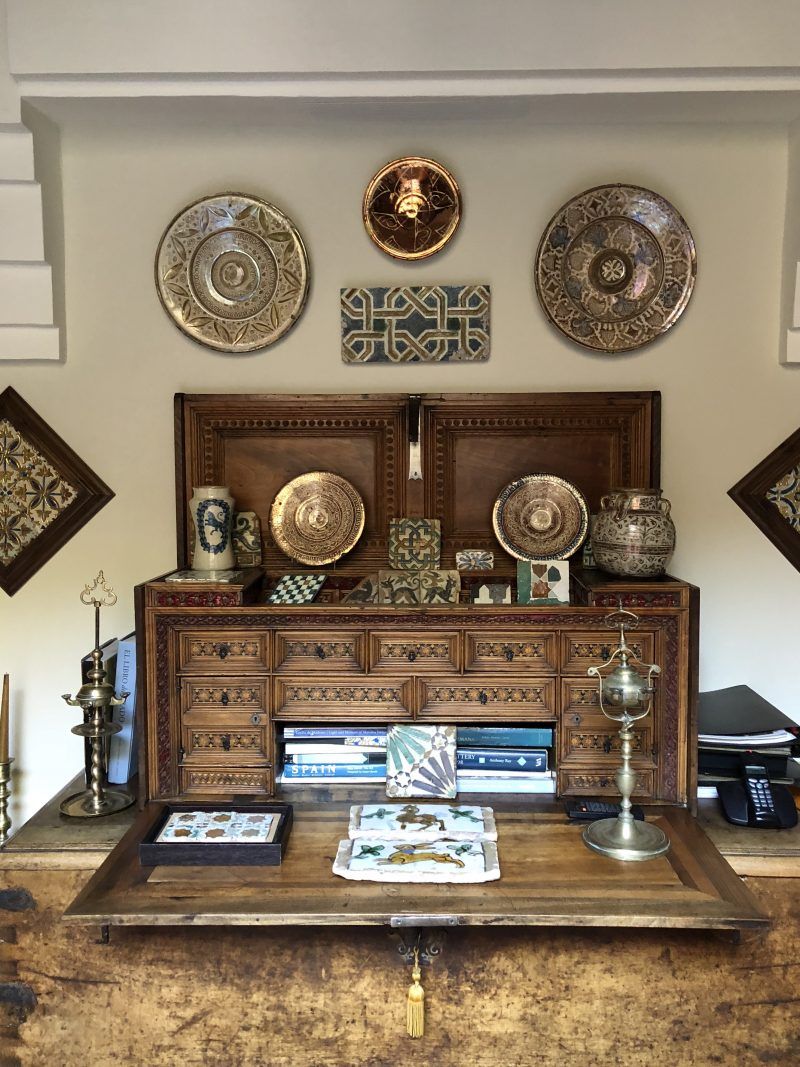 The restoration of the Carmen de los Cipreses was his first project. “I received a prize for it, although it was a terrible project”, he acknowledges. Nowadays he is the responsible for 250 projects. He is trying to restore the Carmen de Santa Teresa in Calle Páges. “This is where my grandmother lived, my earliest memories are in this house. I am trying to regain those memories from air photographs. However, a lot of documentation is lost, and nobody knows where it is.”

One of Antonio’s proudest projects is the restoration of a monastery called Monasterio de Santa Isabel la Real that lasted 25 years. He states: “Granada owes a lot to this community of nuns. It is one of the most beautiful places in the city”.

On his desk, many projects are piling up at the same time. All of them are very ambitious and meticulous. “I am working on the Carmen de Apperley, which a person from Granada who lives abroad decided to buy. It is small but beautiful.” Moreover, the Council of the Alhambra and the Generalife put him in charge of the restoration of the canal called Acequia de Santa Ana, also known as Romaila. “Nonetheless, there still are plenty of houses to discover” he stated. Even though, for him, the Albayzín is a place to restore and not to do experiments of restoration with.

The career of this architect was not always easy. “We have reached an absurd level of difficulty in local licenses management. Some of my projects from 20 years ago for the restoration of beautiful houses are still in the pipeline and I’m not a new hand in architecture! This issue has nothing to do with any political party in the local government” he affirmed while he shrugged his shoulders. “The Albayzín Plan of 1990 was meant to be implemented and wasn’t.”

He has received many and great disappointments. It is apparent when Antonio starts to read the lines written by the restorer Leopoldo Torres Balbás in which he complains calmly about how it is possible to receive so much criticism from a part of Granada when he was the prime mover of the restoration of the Alhambra. “I can’t read that…” Maybe because Antonio finds some common points with the difficulties he had when he started the work to restore the Albayzín.

He is 68 years old and has been working on the district for 41 years. Antonio explains his other passion: “I am an architect by vocation. When I finished my degree in 1976, I decided to live in Granada and to work in the Albayzín. 70% of my works are in this district. When I first came to Granada, my concern was the water, and this concern will follow me until my retirement. I am trying to write a Ph.D. thesis on the canal called Acequia de Aynadamar because I remember that in my grandmother’s carmen there wasn’t running water during the forties. A donkey driver used to bring the water from the spring Fuente del Avellano and we collected it with pitchers and pots.”

Paco Izquierdo, Santiago Navarro, Manolo Mudéjar and Rafael Guillén are some of the names that appear constantly in his memories. I lived with these people the Albayzín of the seventies.

What is my opinion of these years? I am extremely concerned about the Albayzín. Renting flats to tourists is destroying the district. Besides, the urban development works are poorly executed. The district has to be suitable for walking, but the potholes make it very difficult. A good example of this is the little square called Placeta de Porras.

Antonio affirmed: “People don’t care about the Albayzín. I live in the district but nowadays it’s very difficult to live here. It is impossible to walk through its streets. Restaurants shouldn’t be allowed to place terraces in the Paseo de los Tristes. It is one of the most beautiful promenades in Granada and nobody tends to the riverside’s vegetation, so it’s impossible to see the water flowing.”