Zafra’s Nasrid house stands in the heart of the Albayzín amongst winding alleys that lead downhill to Darro River. A landscape always framed by the eternal silhouette of the Alhambra. An important family built this villa in the 14th century in the Axares or Deleite suburb, a part of the Albayzín where Andalusian aristocrats built their houses and palaces. As the Catholics kept conquering the Nasrid territory, Granada had to shelter many refugees, as it was the last Arab stronghold in the Peninsula. As a result, population density in the Albayzín raised exponentially in the 15th century. Due to the population growth, many Albayzín houses were enlarged by building another floor on top. This is exactly what happened in Casa de Zafra.

After the conquest of Granada, Isabella the Catholic gave some plots of land with some Nasrid villas as a present to her faithful secretary, Don Hernando de Zafra. When Don Hernando and his wife passed away, the convent called Convento de Santa Catalina de Siena was built in these lands as their last will. Casa de Zafra remained almost the same but inside the buildings of the convent.

Today the house houses the Albaicín Interpretation Center, with which it is intended to value the house and turn it into the gateway and cover letter of the Albaicín, a World Heritage neighborhood in 1994. 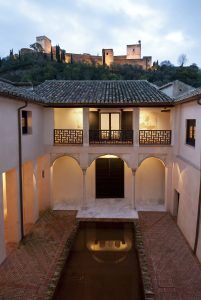 Several centuries after, the Arabists Almagro Cárdenas and Rafael Gómez-Moreno made Casa de Zafra known again in the late 19th century. However, the convent where this house was located had its first public recognition in 1931 as a historical and artistic monument. Gallego Burín, Granada’s mayor, bought the house for the City Council in 1946 when he discovered the poor state of preservation of Casa de Zafra. There have been several restorations from that point onwards. The last restoration work took place between 2010 and 2012. In 1985, this house was declared an Asset of Cultural Interest, the highest level of heritage protection which can be assigned in Spain.

Nowadays, this house also hosts the Albayzín Interpretive Centre, an ambitious project promoted by Granada Tourism Plan. The aim of this plan is to add value to this house and make it the Albayzín entrance gate. This would be the best introduction to the district declared World Heritage Site by UNESCO in 1994.

The visit to the Interpretive Centre focuses on four key topics: the concept of World Heritage, the origin and evolution of Granada, the Albayzín district and the recreation of a Nasrid house.

The Interpretive Centre was created as a consequence of its declaration as a World Heritage Site, and this is explained to the public at the beginning of the visit. The aim of this new program is to enhance the historic, artistic and cultural heritage of this district.

The visit continues with the explanation of the origins and evolution of Granada, directly linked to the Albayzín history. In this part of the house, the different historical periods of the city are explained from the Iberian city, Iliberri, until Granada during the Enlightenment period. This exhibition highlights the changes that affected the Albayzín throughout the time.

The third topic, on the top floor of the house, focuses on the living heritage of this district. The visitor can admire its streets, squares, viewpoints, houses, churches and Islamic remains.

In the last room, the visitor can contemplate the biggest collection of epigraphic decorations of the house. In here, there is an explanation of how domestic life in Islamic houses worked, using Casa de Zafra as an example.