Andrés Manjón was a Spanish priest and educator whose magnum opus was founding Ave María Schools. These schools differ greatly from those Andrés Manjón attended in his hometown, where he had a bitter experience. He is one of the greatest educators of the second half of the 19th century and the beginning of the 20th. He was also one of the pioneers of active and outdoor learning. Nature and games play a key role in this pedagogical movement. Andrés Manjón carried out these methods in his masterpiece: La Casa Madre (The Mother House). This professor, writer and foremost teacher, advocates for an integral education. An education that does not leave aside any aspect such as morality, society, sport, intelligence, religion, will and character.

After leaving Burgos, his hometown, for academic reasons, he lived in several cities like Valladolid, Salamanca, Santiago de Compostela or Madrid. He finally arrived in Granada in 1880 where he would spend the rest of his days, until passing away in 1923.

On his usual walks around Sacromonte, he used to observe the inhabitants of the district, most of them gypsies, living in a state of complete degeneracy, misery, poverty, ignorance, delinquency, filth, kids abandoned in the streets, neglect and lack of education, especially in the children. All of this affected him morally and it spurred him to find a solution. He faced this situation every day and could not look the other way.

This school rose up by and for poor people, for gypsy people, for the socio-educational regeneration of the Sacromonte. After this school was founded, criminality dropped remarkably.

He named the school after the title of Granada Cathedral: Ave María (Hail Mary).

The first Ave María School Andrés Manjón founded was La Casa Madre in 1889. The aim of this school was to end with Sacromonte social alienation. 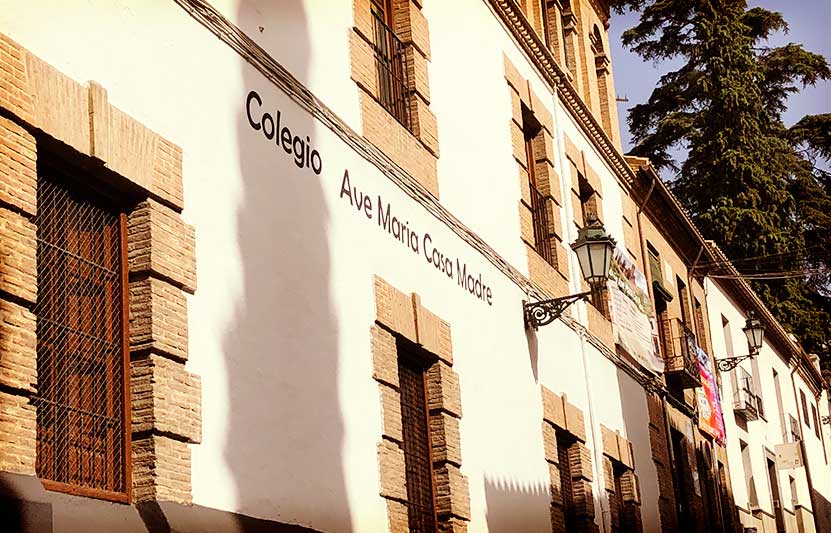 The social stratum of Ave María Schools students could not be any lower: children lacking a proper diet to whom the school provides food; children living in unhealthy conditions in caves or shacks; children coming from uncultured families; children seized by an environment of promiscuity and immorality; children living without a serious religious education.

La Casa Madre occupies seven villas between Cuesta del Chapiz and Camino del Sacromonte. It covers an area of around a kilometre long and a hundred meters wide in average. The school stretches along Darro Riverside, in the valley known as Valparaíso.

Currently, they offer courses ranging from pre-school to higher secondary-education.