In the book Granada en la música clásica universal (Granada and the universal classical music), the authors Rafael and Ignacio Hierro pointed out five spots in Albayzín related with this topic:

However, the authors mark the three epicentres of music in Granada: 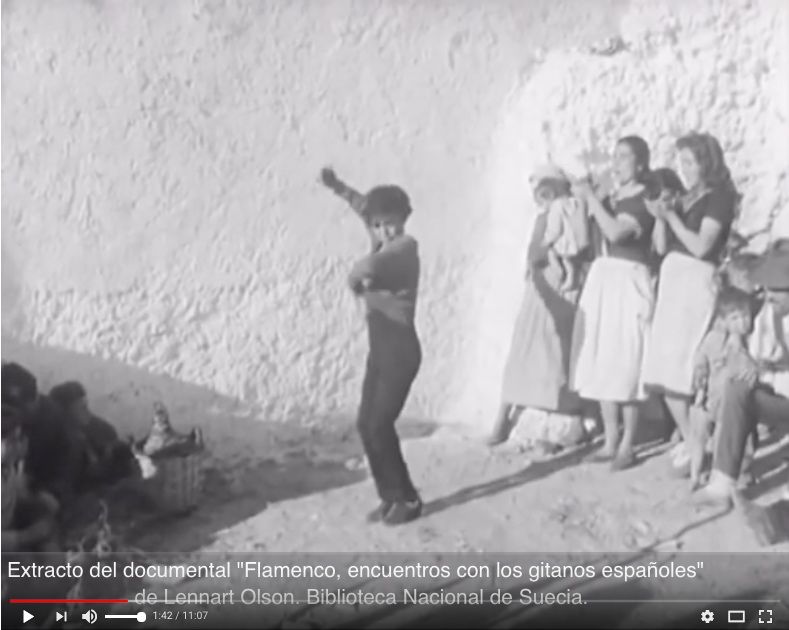 “Gypsies do not live in Sacromonte but in its road… An old Arab road for carts that started at the end of the wall where Paseo de los Tristes is located today… a dusty track that lined the upper part of the Darro River with small bridges to cross the cliffs.”

“(…) the track on the slope of the narrow Darro River shows one of the most wonderful landscapes in the region. This view is characterized by a scale of green starting from the hills dried up by the sun and dotted with prickly pears and agaves to the moist green emerald of the villas close to the river.”

“(…) gypsies chose these hills of the Holy Mount in the beginning of the 18th century to spend their existence.”

The Spanish writer Eduardo Molina Fajardo wrote these words about the district that is the cradle of Flamenco.

Follow the link to watch the documentary Flamenco, encuentro con los gitanos españoles (Flamenco, meeting with the Spanish Gypsies) recorded in the Albayzín. In 1962, a group of the Swedish public television directed by Lennart Olson and the guitarist Dan Grenholm recorded the last images of the gypsy community living in Sacromonte before their forced expulsion due to the floods of 1963. The flamenco singer Curro Albaicín explains in the documentary Sacromonte. The wise of the Tribe what happened during these floods and the impact they had on the community.

The Musical Documentation Centre of Andalusia is an institution created in 1987 by the Culture Department of the Andalusian Government. The aim of this institution is to recover, preserve, catalogue, classify and spread the musical heritage created or related to Andalusia in all possible formats.

The building is located in Carrera del Darro. Even though the date of its construction is unknown, its architectural style seems characteristic of the end of the 16th century or the beginning of the 17th century.

The Musical Documentation Centre of Andalusia has the following functions:

1. To collect all the musical material created or related to Andalusia in all formats such as sheet music, audio and video recordings, manuscripts and all kind of texts and objects.

2. To preserve, catalogue, classify and index the musical works and resources from the Andalusian Legal Deposit related to sheet music and music productions.

3. To maintain the documentary resources and references to help the study of Andalusian music or musicians.

6. To register all the music and dance resources in Andalusia.

7. To promote the Andalusian music heritage, the Centre’s collections and research works through public performances, publishing, printing and recording with or without image or through any means.

8. To organize activities related to the Centre’s commitments.

9. To carry out any action derived from the aforementioned functions.