Peña de la Platería is the oldest flamenco club in the world. In this article, it is possible to take a closer look at this icon for flamenco lovers. Plenty of legendary flamenco artists like Camarón de la Isla, Carmen Linares or Antonio Mairena came to this club to perform. This club has hosted not only the classic flamenco artists, but also many of this art’s innovative singers like Rocío Márquez, Chano Domínguez o Rafael Prodel. Furthermore, the first contest of what is considered the purest flamenco style, called cante jondo, was held in the carmen in the same place in which this club now stands. Many known figures of that time participated in this contest, such as the poet Federico García Lorca, the composer Manuel de Falla, the guitarist Andrés Segovia or the painter Manuel Ángeles Ortiz y Zuloaga.

“Flamenco lovers from all over the world know La Platería.” Juan de Dios Vico has been the club president for six years, until July 2019. Antonio Idígoras is a board member of the club. We are in the yard of the carmen (traditional villa of Granada) where this club is located. According to Vico, Ídigoras is “a flamenco icon in Granada”. Both of them, along with the rest of the board members, are the engine of this cultural association. This club was founded in 1949, so in 2019 will be its 70th anniversary. Despite all these years, nowadays this club is living a golden age.

“In the 90% of the flamenco clubs there are around 10-15 performances per year. Nevertheless, we hold nine every month. Besides, each week, we organize singing, dancing and guitar concerts performed by young people from Granada.” This beautiful place has an outstanding programme of concerts on Saturdays (members only) and Thursdays (public).

The figures do not stop there. This non-profit association has around 300 members, and Its main objective is to preserve study and spread flamenco culture. The club has special offers for people under the age of 25, which is helping to rejuvenate the club’s public.

This club organizes guided visits for schools, high schools and universities. About 400 people have learned a little bit more about flamenco due to these visits. “They come here, and we explain what the club is. They then visit our museum, after which we invite them to a performance in the main stage of our club. Thereafter, three professional artists talk with the kids about how they live. They also explain the difference between pure flamenco and light flamenco. The artists also try to make the kids sing and dance. This activity is a complete success. The best thing is that these kids will talk about our organization with family and friends after the visit.” 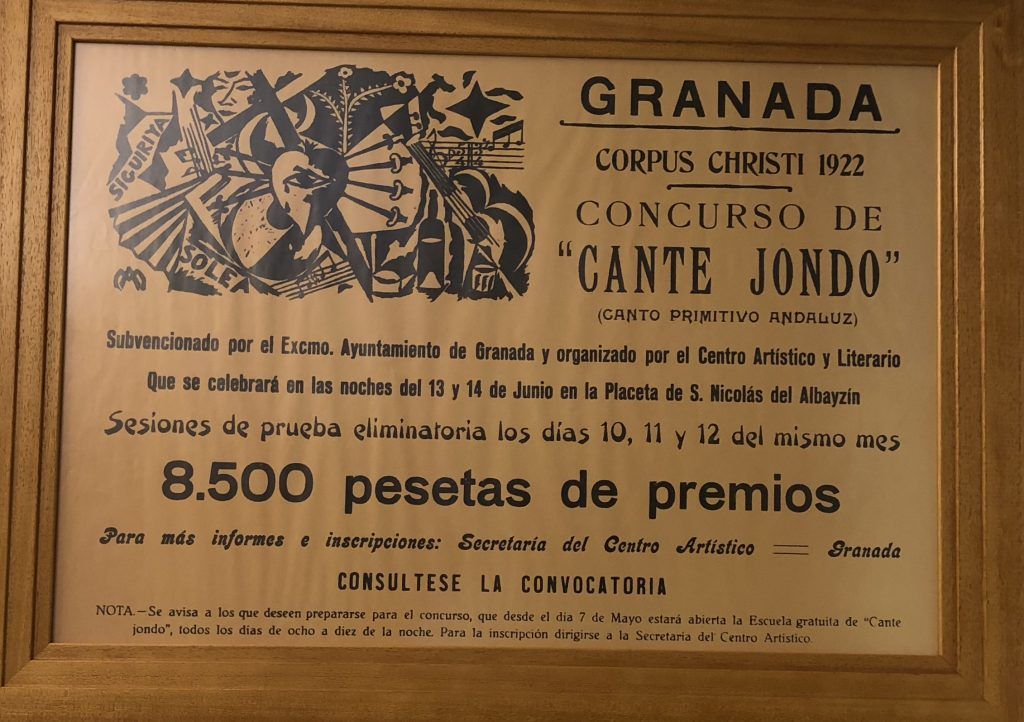 The head of the club states: “One of the most important things we have in our club is what cannot be seen by the naked eye. We have some 3 000 or 4 000 audio and video recordings produced in this very club. This material is completely organized and catalogued in a regional government network for documentation and specialised libraries (Red Idea). Aside from the archives of the Andalusian Institute for Flamenco, we probably have the biggest collection of flamenco audio and video recordings.”

Besides the amount of work they carry out, the quality of this work is also fundamental for them. Because of this quality, the club has won many awards, such as the Gold Medal of Merit in Fine Arts granted by the Spanish Minister for Culture.

As if this weren’t enough, they usually host flamenco books and albums presentations. They have even collaborated with the University of Granada on the editing of books about this genre. The last one was Manual de cante de Granada (Granada songs’ Handbook) written by Miguel Ángel González.

They also help to produce flamenco albums. For instance, Alfredo Tejada, an outstanding flamenco singer that lived in Granada for many years, released his first album recorded in this club. Alfredo is succeeding all over the world and has won some of the most important flamenco contests, such as the Lámpara minera in 2017.

Did any of these activities help to the good moment Flamenco is living in the city? Of course. Vico points out: “These days, it is very difficult to find a single important flamenco event, whether regional, national or international, in which you cannot find at least one artist from Granada. There is a very good generation of artists coming. Guitar players, dancers, male and female singers are all reaching an excellent level. We are having a lucky streak.”

All of this intangible heritage is located in this magical district. Vico comments: “We have a very good relationship with the neighbourhood. Some of our members are from the Albayzín. I’ve organized some guided tours around the Albayzín for members thanks to my knowledge as an Art History teacher.”

Juan de Dios Vico wants to clear any doubt regarding Antonio Idígoras’ true Albayzín origins: “Antonio’s wife is Teresa Cabrera, a very well-known woman in Sacromonte, and his brother is the flamenco singer Curro Albayzín, who is an honorary member of this club.”